Lightweight and protective fetlock boot which complies with the standards set by the FEI and British Showjumping for use in young horse classes and other restricted classes.

Please Note: In order to receive your non-custom, in-stock products in time for the holidays, please place your online order by December 16th. If you have any questions, please contact us here.

Office Closing For Holidays – Please Note: So that our entire World Equestrian Brands staff can enjoy the holidays, our office will close at 1:00 PM EST on December 22nd and re-open on January 2nd.

Lightweight and protective fetlock boot for horses. This horse fetlock boot complies with the standards set by the FEI and British Showjumping for use in young horse classes and other restricted classes.

Pair with the matching tendon boot.

As fetlock boots are commonly paired with tendon boots, we’ve created a smart pair that compliments each other. The Tri-Zone Open Fronted Boots provide breathable, flexible protection for your horse.

Take a look at the fetlock boot in more detail.

The boots are comprised of 3 protective layers, which aim to protect from concussion and penetration.

The first layer is smooth and soft, which allows it to sit comfortably against the horse’s leg.

The second layer is a tough and breathable, yet flexible material. This allows it to be durable and protective but also enables the horse to move without restriction.

Finally, the third layer provides strategic protection to the inside of the fetlock joint.

As riders, we protect our most vital areas (head and torso) with riding hats, body protectors and more recently air jackets. Rider protective equipment is subjected to extensive testing to meet standards and regulations and we believe that as a vital part of your horse, protective boots for your horse’s legs should undergo a similar testing process.

Tri-Zone boots go through a unique 3-phase testing process giving you confidence that you are choosing the best leg protection for your horse. Materials are carefully selected to provide maximum protection but without being bulky, heavy and not make your horses legs hot and sweaty. Each individual layer in the Tri-Zone boot is researched and sourced for their advanced technical properties and tested in an independent laboratory before it goes anywhere near a horse’s leg.

In the same laboratory that tests standards of riding hats and body protectors, Tri-Zone boots are safety tested to their limits for their ability to withstand concussion and penetration whilst remaining lightweight, breathable and flexible.

For concussion and penetration, the testing is carried out using a custom-made test rig consisting of a tower from which either a blunt hammer or a cutting blade is dropped onto the boots in a controlled fashion. The weight of the blade and hammer is fixed and different forces are applied to the boots by varying the height from which they were dropped onto the boots. Boots were hit with forces ranging from 1.25 to 20 Joules. These forces were chosen as being those likely to occur in the horse during exercise, for example when hitting obstacles or over-reaching.

We test our boots to measure how well the boots allow heat to escape in order to reduce the risk of tissue damage.

Research has shown that when tendon cells are heated to 48°C for 10 minutes approx, 80% of them die. We use several different methods to assess heat release from boots. The heat release is estimated by fitting the boots to a metal flask containing water at 45°C in a room at 20°C with no significant radiation. The surface temperature of the boots is measured using a thermal camera. We tested Tri-Zone boots, along with a number of other boots on the market.

From this, it was clear that some boots were very effective insulators and kept the heat in so the outside of the boot appeared cold. Other boots appeared much hotter on the surface, showing that they were allowing heat to escape.

Heat release was then estimated by measuring the rate at which the temperature of the water in the flask dropped whilst 20°C air was being blown over the boot (via a fan). This was done to simulate the movement of air over the boot and leg as would occur during exercise.

If boots are constructed of inflexible (i.e. stiff) material or if boots are applied too tightly, they have the potential to restrict joint movement and cause other problems such as tendonitis. Stride characteristics and performance could also be affected. Boots need to allow as much freedom of movement as possible without compromising on their primary function of protection. We test our boots to make sure that they do not restrict the horse’s movement whilst still exceeding protection requirements. An 8cm x 1m steel pipe is set up secured to a workbench. The boots are fixed to the pipe and a 10kg weight is attached with a clip on the boot and the downward direction measured. The degree of flexibility is measured by how much the boot bends.

Adding even small amounts of weight to the end of the leg in the form of a boot significantly increases the effort the horse must make to run and can also alter the stride characteristics. Some boots can double in weight if the horse is being exercised in the rain, on wet ground or going through water. This can seriously affect stamina and performance. We design and test our boots to minimize water absorption, excess weight but without compromising on protection.

The boots then undergo trials by an extensive tester panel of horse owners and riders who test them for fit, comfort, ease of use, and washing to ensure we have not only a safe product but one that people can easily use and trust.

Finally, the boots go through the rigorous test of being used all day, every day on busy competition yards by teams of professional riders. Tri-Zone boots are worn either at home or at competitions by an array of Olympic riders, world champions, and top producers. 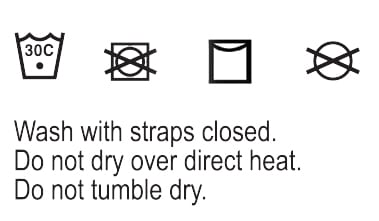